From how I get in, to how I navigated two floors without floors. Here’s the behind the scenes story of our scan. 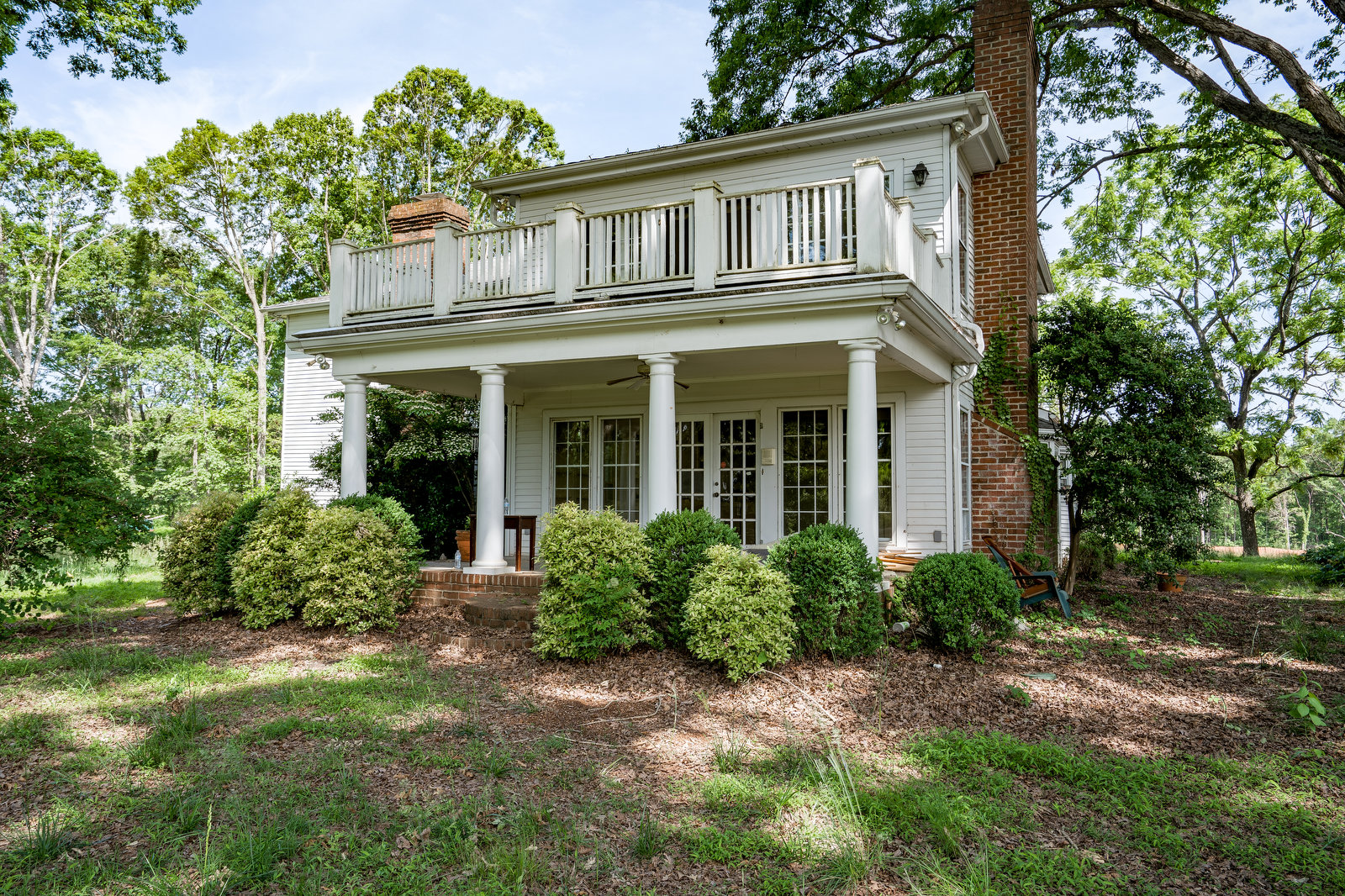 When I came up with the idea for Preserving Spaces, I was influenced by the fact that my town (Huntersville) seems to be changing a lot. Granted, I am not a NC native. In fact, I’ve only even lived here for a few years. Yet in that time, I have seen numerous subdivisions being built and what seems like countless hundreds of houses being built. With such development comes similarly countless hundreds of acres of forest being lost. I was drawn to the forested areas here, and I was drawn to the historic, sometimes dilapidated, buildings of the area.

I am the kind of person who will look at an old rundown building and stand around for hours wondering what happened there? When did they decide to abandon it? Why? When was it built? Were people excited about it when it was built? Why’s it forgotten now? Sometimes the answers are fascinating, sometimes they’re mundane. Fortunately, I have come to learn that others are interested in these old buildings too. 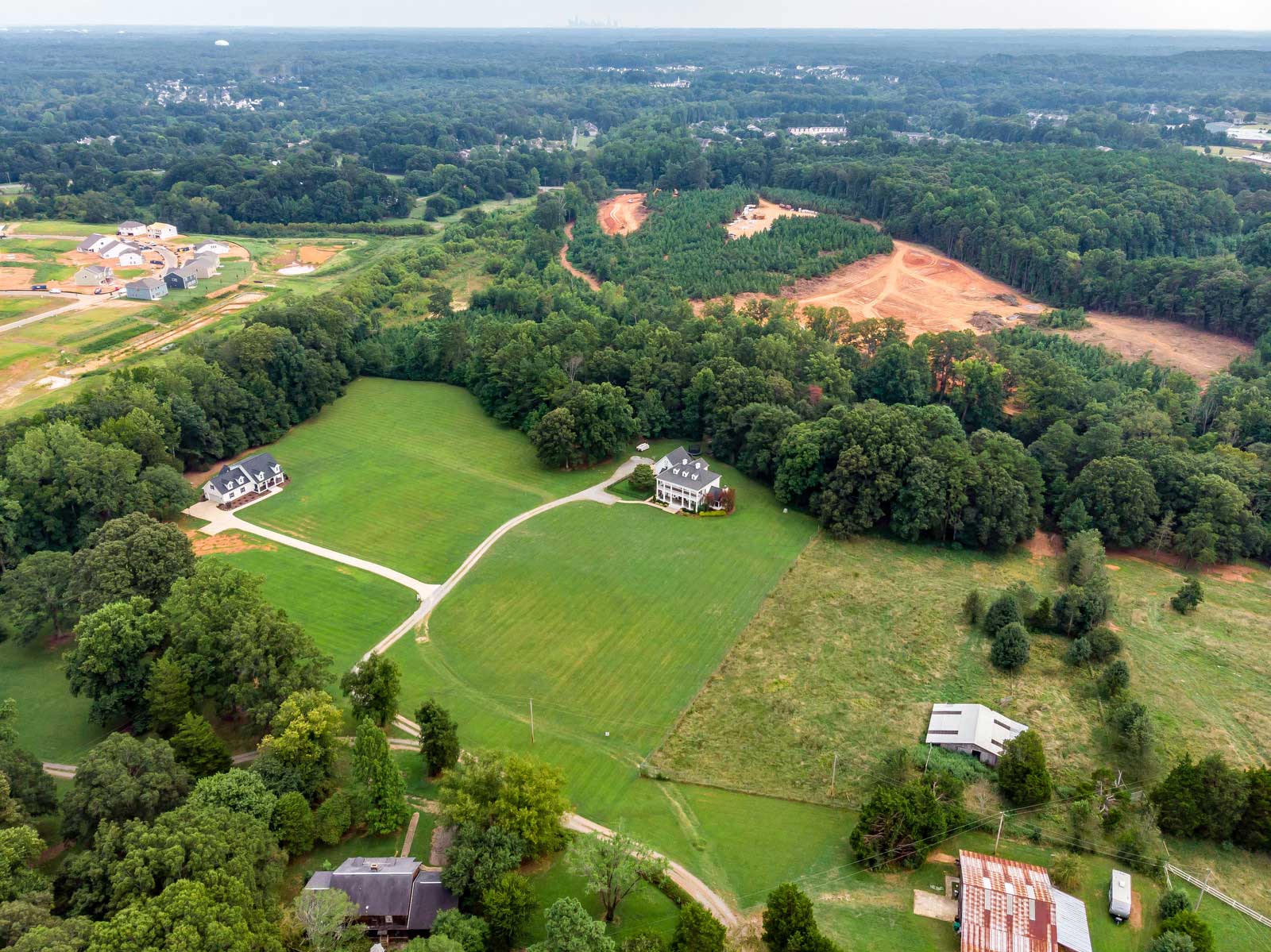 The clearing for the sports complex can be seen at the top right of this image.

In August of 2018, I had been hired to photograph a listing near 13828 Beatties Ford Road. While flying my drone to capture some aerial footage, I noticed a lot of property being cleared out just around the corner from my neighborhood. You could see some of the work from Old Bud Henderson, but it was hard to tell what was going on and what the scope was of the construction. From the air, I was convinced it was another subdivision.

Later I would learn that it was the Community School of Davidson clearing out the land to build their new sports complex. However, it wasn’t until some months after that revelation that the white house and log cabin appeared. As more land was cleared out, there was no longer any trees obscuring the house or the cabin. I didn’t notice the cabin at first, but I was in love with the house. Eventually, through social media, I began hearing people asking about the cabin, so I looked into it.

Having my NC real estate license, I checked the local MLS and saw when the property had been sold and who the listing agent was, so I reached out. No luck really getting any helpful information or contacts. I was just told the house might be demolished and they wanted to save the cabin. It wasn’t until later on when I was invited to tour the house that I learned more about what was going on.

Sometime between hearing this information and touring the property, I started Preserving Spaces. I had the idea in my head for a while, but I decided it was time to take a chance and try something new. Through contacts I had made from the project, I was invited to tour the property and the log cabin. As you can see in photos, the house was is no condition for visitors. We were told it was deemed structurally unsound and, therefore, dangerous and it needed to be demolished so it wasn’t a liability. With permission, we set up an opportunity to get inside and scan the partially deconstructed house. 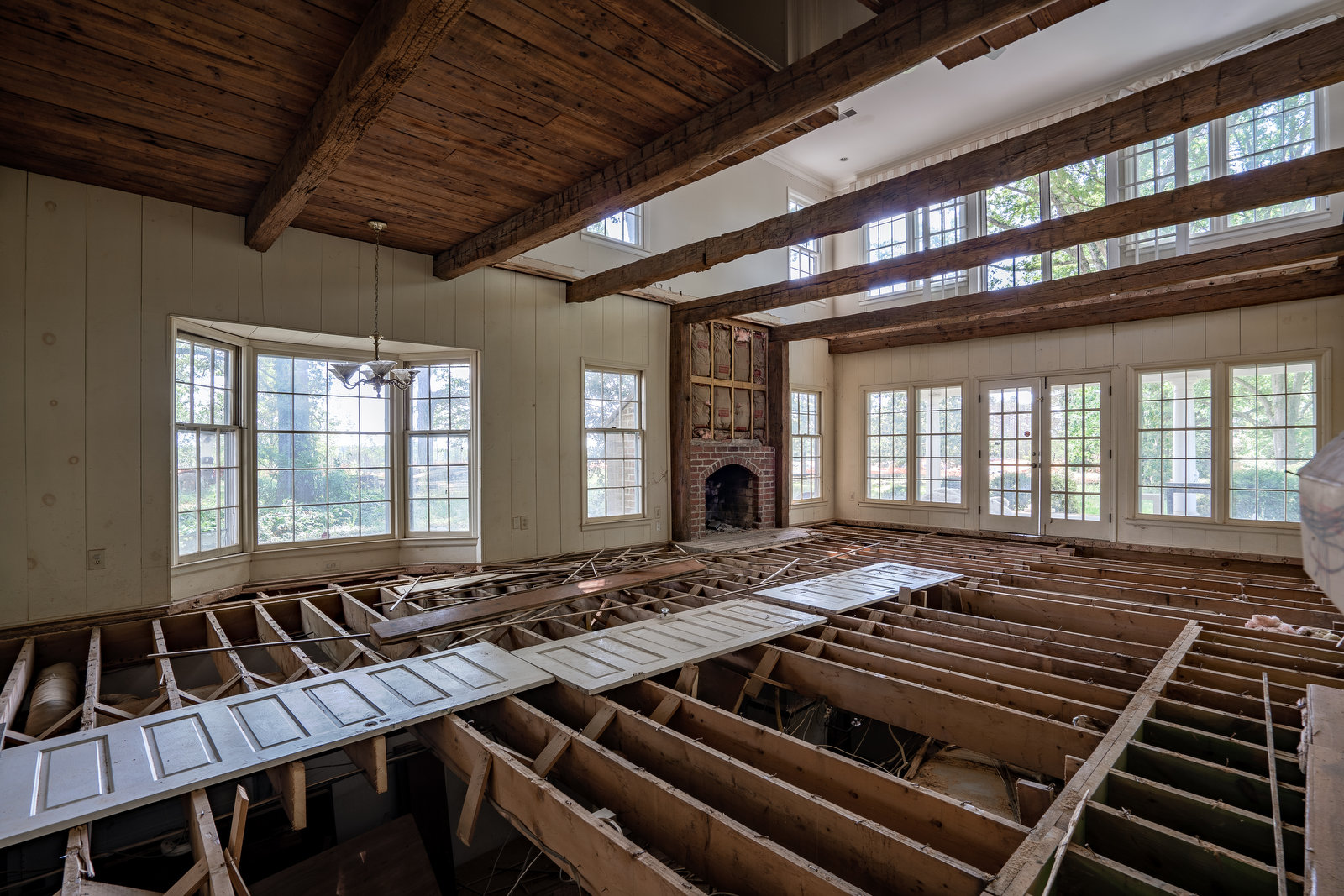 By the time we arrived, some heavy salvage work had already been started.

When we did our tour, there had already been quite a bit of salvaging done on the house. The floor in the living room and second floor above the living room were totally gone. We were told by a CSD representative that permission had been given for some people to salvage the old wood floors in an attempt to generate some funding to preserve the cabin next door. Near the kitchen, a whole section of the exterior wall had been removed to make getting the salvageable items out easier. You could see straight to the basement, and someone placed doors down as a makeshifts walkway. Even with the old doors providing a path, scanning proved to be quite difficult.

Because of how our tour system works, I had to begin in the basement. The floor was partially covered by what I assume was debris from some portion of the salvage job. By the time I got through to the kitchen, I knew things were going to be tough. The whole floor form the kitchen through the living room was missing and only the floor joists were left. They were beyond sturdy enough to support me, though I didn’t quite trust the doors. The challenge was trying to get my tripod level while still fitting it on the doors and doing all this without falling through to the basement.

In a few places, I had to balance the tripod leg on a joist and hope for the best that the whole thing wouldn’t go crashing down below. For the second floor, I couldn’t even access the whole back half of the house because the flooring was missing. You can see in the tour, and somewhat in the photos what I am talking about. I decided to take some photos after the tour was done to try and document the house in the highest resolution I can, since the 3d tours have some resolution issues. 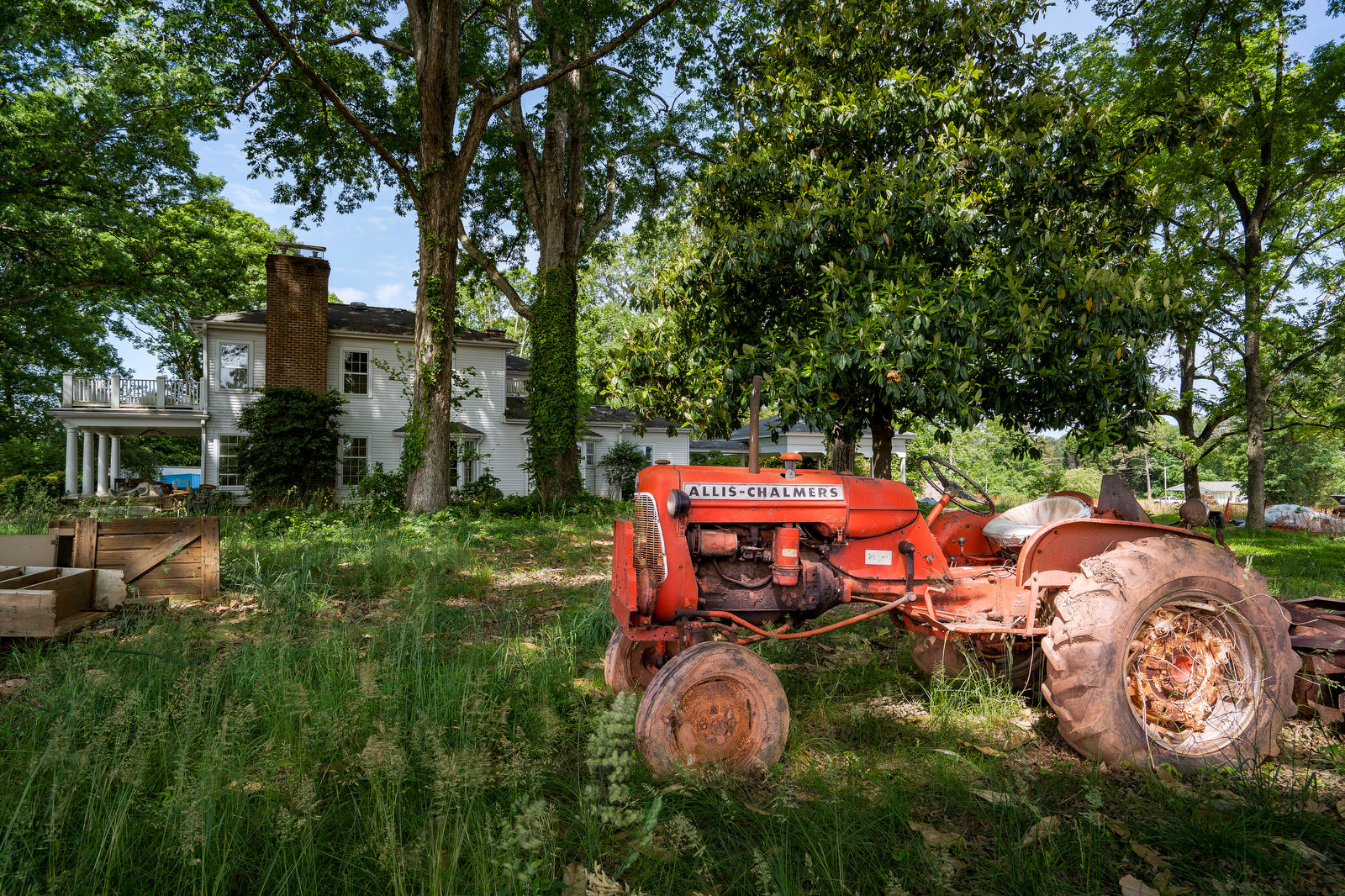 A House Preserved… Virtually, At Least

Since this project is still really new, there’s a lot to figure out. I am really fascinated by old buildings and otherwise abandoned places. Preserving Spaces has the unique ability to grant access to these spaces where access is otherwise difficult or impossible. While my primary goal with Preserving Spaces is to create unique, engaging multimedia content revolving around historic buildings and places, I also hope to save one or two along the way. Others, however, just can’t be saved. This house fell under the latter. Fortunately we were able to create some photos and virtual models that will stick around at least a little longer yet.

If you’re also interested or passionate about the old buildings and their stories in your town, the best thing you can do is make it known. Show up when they have open houses. Donate a dollar or two. Help their fundraising drives. At the end of the day, some of these buildings are unsafe and need work to be preserved and without proper funding, they’ll fall into the same fate. Everyone loves shiny new things, but I think it’s safe to say we are all similarly enamored by the old things too. Unfortunately, once the old things are gone, they’re probably not coming back. 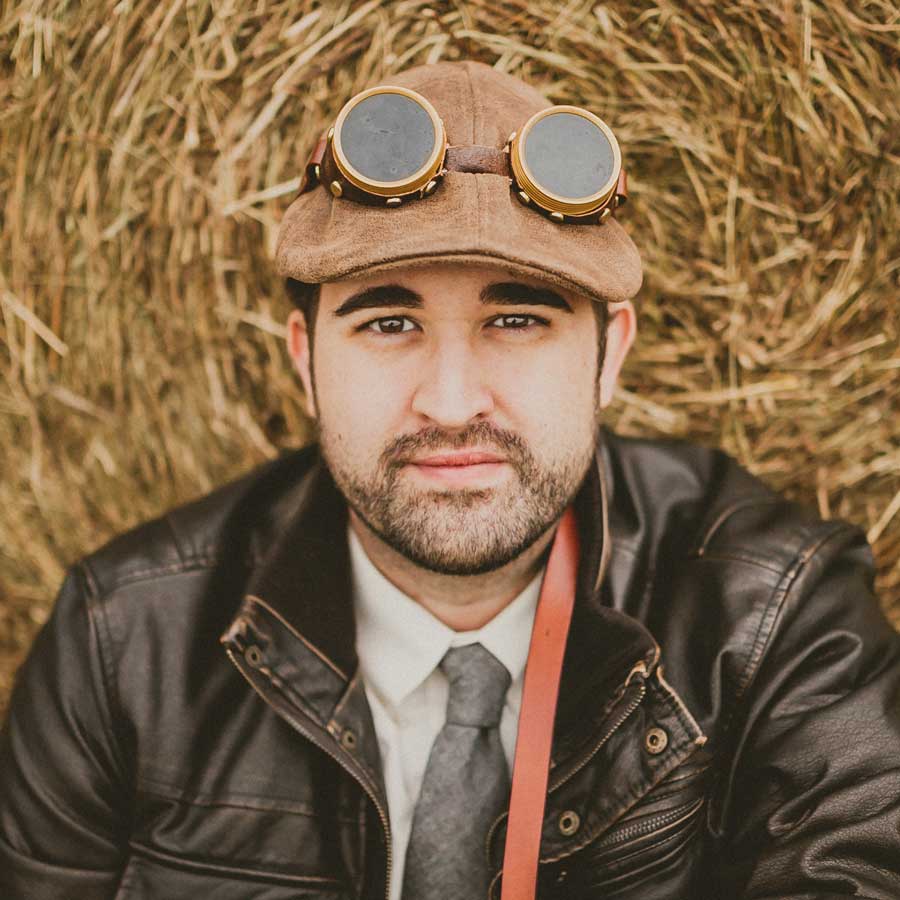